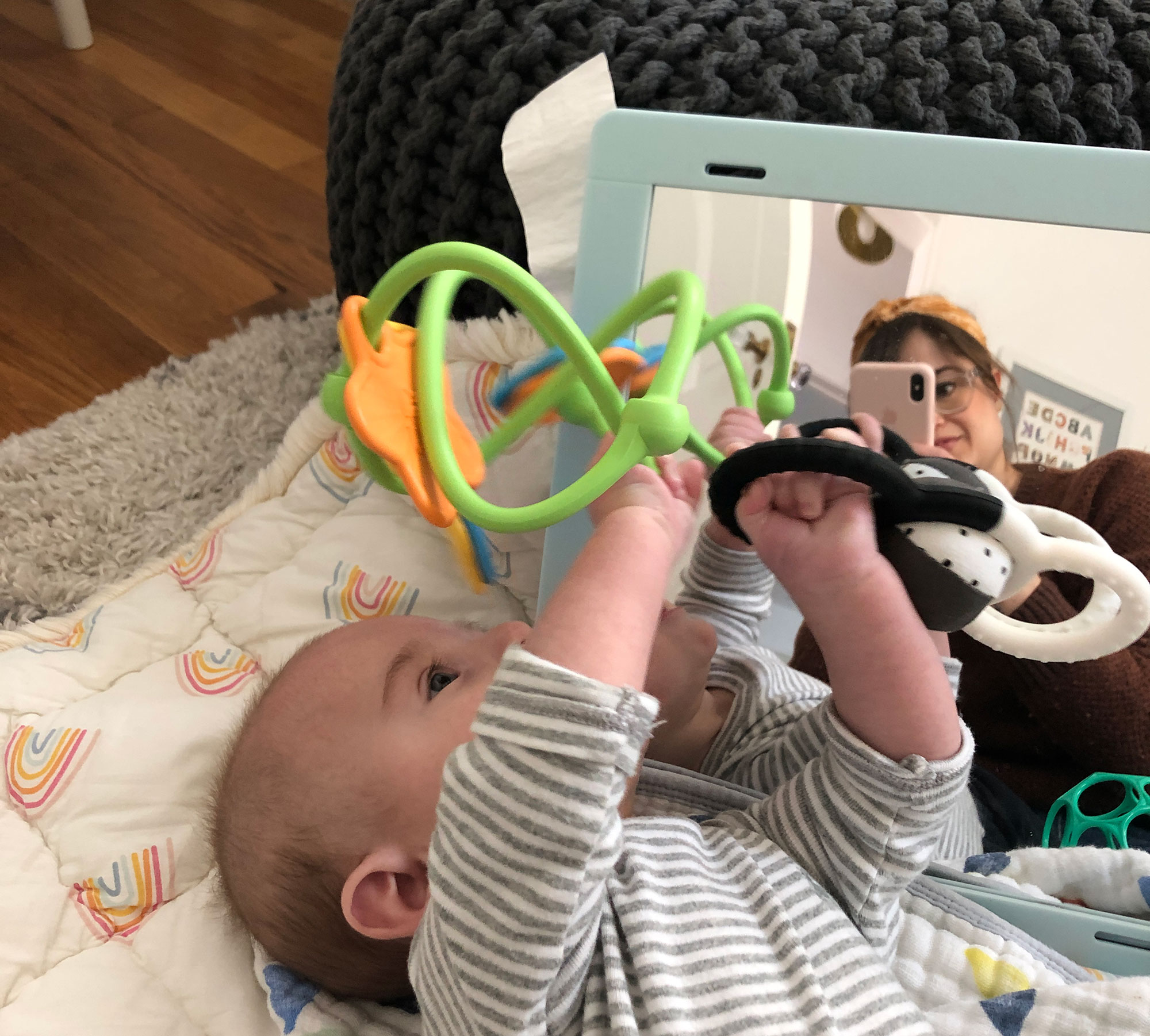 I am officially no longer the parent of a newborn. Now I have a regular old infant. I’m back in jeans, taking yoga, and out in the world high on caffeine. I’m just another young (hip and cool!) mom pushing a stroller at Target mid-morning, picking up shit I don’t really need because I wanted a reason to leave the house. This also means I’ve officially not slept longer than three hours at a time for one-third of a year. If you’ve ever experienced this special little hell, you know how psychotic one can become in trying to escape.

Much like a scientist, this entails a lot of research, hypothesizing, and experimentation. It requires careful observation, accurate reporting, and conclusions. Also, math. How many millimeters in an ounce again? What does a growth percentile mean?

Unlike a scientist, the research happens over text, in Facebook groups, and in the dark, windy, uncurated halls of Reddit. The hypothesizing occurs through tears (yours and baby’s) at 3 am (I DON’T THINK THE ROOM IS DARK ENOUGH?!) Experimentation occurs with every single decision you make about your child’s well being throughout the day. Math is conducted on baby tracker apps and on fingers in the middle of the night.

All this intense learning is focused on the sleeping and the eating (as it pertains to the sleeping of course).

Me, I’ve tried microdosing formula in breast milk bottles. (It didn’t make him sleep.) I literally observe my test subject on a monitor, making note of every new behavior.

You will masochistically ask anyone with a baby the very question you hate being asked, “Are they sleeping through the night?” If they say “yes,” you feel bad. If they say “no,” you will still feel bad. Because, no matter how many other babies’ sleep patterns you inquire about, yours remains the same. You choose to only focus on the urban parenting legend of the baby who was always a perfect sleeper.

If you are bestowed with an unexpected break in the storm, you pour over the events of the day leading up to the miraculous night, trying to find the key to your baby’s success. You will, of course, find absolutely none. The rest of the week becomes a series of obsessive tweaks to the routine, the feeds, the temps, and the naps based on wildly contradictory input from family, friends, and of course strangers on the Internet  –– all to no avail whatsoever.

This is because your experiment is inherently and significantly flawed. Your control subject is actually a variable. You’re trying to perform a daily, weekly, and monthly experiment on a jumble of ever-fluctuating elements.

So you decide to stop caring about the sleep, and the weight percentiles, and to start believing in your baby’s ability to self-soothe and develop at their own pace. And you remain, easy and breezy; instead, following your baby’s lead, until your child has a regression or a growth spurt and you’re back groveling on the Internet by the glow of your phone at ungodly hours of the night. Why would you ever take cues from someone who doesn’t even realize they’re drooling?!

All those times you scoffed at bedsharing while pregnant? Absolute lies! You’ll do anything to get one more hour of sleep in the early morning, even if it means saying, “Fuck your recommendations, American Pediatric Association!” Shockingly, the newest, “safest” way for a baby to sleep –– on their backs away from their mothers –– is really uncomfortable for them. Can you believe generations of parents were told to put babies on their stomachs and sides? I can’t wait until my son has a child with a whole new set of rules. “I can’t believe you let me sleep on my back, let alone touch the mattress” he’ll scoff at me. “It’s amazing we all survived before sleep suspension.”

We’re renting a Snoo on a monthly basis. It’s a robot bassinet with a microphone that responds to the baby’s cries with increasing levels of rocking and white noise, with a sharp Danish Modern design. It claims to help babies sleep through the night. When people ask if it works, or if I like it, I remain undecided. In fact, I’ve threatened to send it back at least once a month, and every time I do, it somehow comes through for us on a particularly sleepless night. Goddamn, you Snoo!

When is it OK to let them sleep in their own room?? I’m tired of being a ninja at night, trying to somersault into bed without touching anything. It’s really hard to not ask, “What do you think is wrong?” every time your baby is inconsolable. You want a concrete problem with a neat solution, but the problem is like an everchanging Escher etching.

I’ve become an indecisive maniac. Every night is a complicated game plan of trying too many different tactics and delegating who does what before bedtime. Every choice we make about the sleeping arrangements feel like life or death. And, I don’t know why I feel a compulsion to add some new “solution” to the mix almost every night –– a new product someone swears by or a way to manipulate naps I read about in an article that day. My husband doesn’t recognize my sniveling, wishy-washy mumbling –– only to change my mind on a decision, he didn’t even know I’d made, a few minutes later. Usually extremely clear-headed and knowing exactly what I want in everyday life, this baby’s erratic behavior, coupled with too much information online, has made me a crusty shell of my former confident self. I’m not used to second-guessing my gut at every turn, but no one can quite agree on the right way to do anything. Even credible medical sources offer slightly conflicting information! I should trust my own instincts but as I said, I’m sleep deprived and piloting a ship with a certification I got off the Internet.

Still, it’s not all madness; I promise.

Though my body will not fully be mine again until I stop breastfeeding, for the most part, I feel back to my old physical self, with the unwelcome addition of an angry backache from said breastfeeding. At least I can wear my favorite t-shirts again.

My brain has somehow learned to function on severely interrupted sleep and most days I feel back online, eager to work and engage with the world. It still takes me a long time to complete projects, and they usually take multiple sittings, but I don’t let that interfere with my creative and personal momentum. Even though I have days where I am frustrated by progress or productivity, I have made peace with my new pace. The baby-shaped speed bump is there for good reason.

I’ve gotten so good at doing things with one hand! Who knew toes were so dextrous!? I’m seriously a pro at unfolding the stroller in public and changing a blow out diaper… literally wherever there is a flat surface. I always remember a change of clothes.

I’m more confident. The baby has come to life. Strangers melt over his big blue eyes and duck down hair. He loves real toys and songs! We (me included!) have playtime every day. I sing dumb Raffi songs to him, even though I swore I wouldn’t succumb to children’s music. But how can I not when his face lights up when I say eeples and baneenees?

We have a bedtime routine that makes us feel like a real family.

Our time together feels less like thankless caretaking and more like we’re both learning something new about the world and each other, every single day. Though I always prefer cash or check, being paid in smiles and tiny giggles are proving to be fair compensation for full-time mothering. In that regard, I suppose the first two months were more like an unpaid internship. I’m glad to have earned a promotion after a short time on the job.

I am truly enjoying my son more every day. But as he gets older, sleep deprivation gets compounded, I am losing it just a little. (See, it all comes back to the motherfucking sleep!) Everything is a season, and even at its worst, nothing lasts forever. And most of the time, you even forget how bad it felt. I’m reminded of that when I think back to my first-trimester nausea a year ago. It felt like an eternity of queasiness at the time and now I barely remember any of it. Veteran parents who have already blacked out the sheer torture of broken REM cycles will tell you to try and enjoy it because it goes so quickly, which is totally true. But, I don’t have to enjoy it. No thanks. Fast forward me to after we’ve sleep trained.

My new baseline for decision making is this: when he and all the other kids in the class of 2038 show up for their first day of kindergarten, will we know who had bottle and who had breast? Will it be apparent who got their vaccines all on one day and who had theirs spread out over a few weeks? Will we be able to tell which child was sleep trained and who was that urban parenting legend who never needed it? If the answer is, “probably not,” then it’s not worth the tears and fatigue.

So, I relax. It’s 8:00 pm, and he’s finally asleep. I study my little experiment on the monitor. Suddenly, I wish he were awake again so we could play.