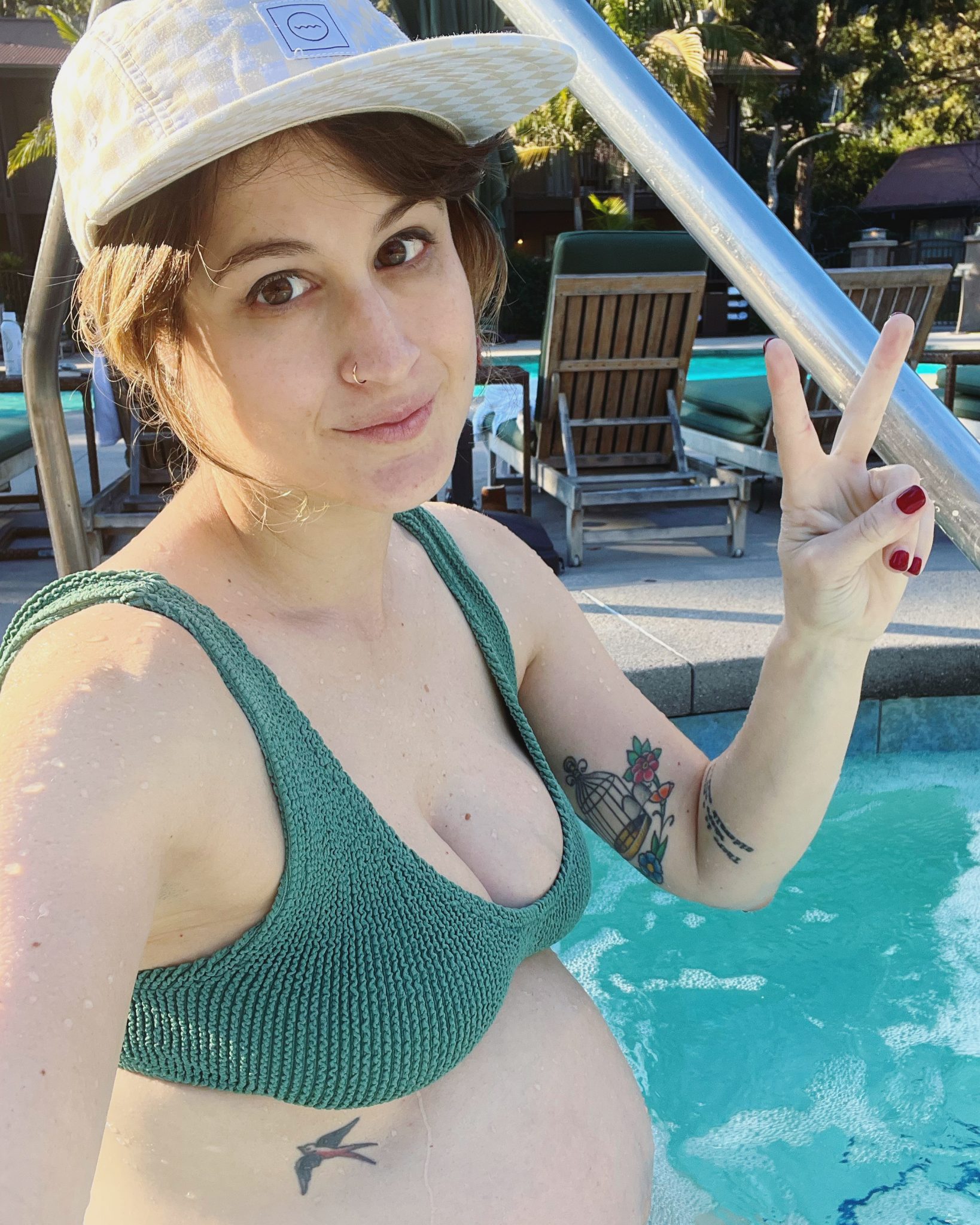 I have always loved clothes –– experimenting and refining my own style, even when it was objectively questionable (2000 – 2013 I’m looking at you). My closet is always churning with an addictive buying and selling habit. Going to the mall and touching clothes is my self care.

However, this once dependable expression of identity proved to be challenging when I became pregnant three years ago. Within a few weeks of my body initiating the process of creating a human, my beloved super high-rise jeans were no longer an option, and I found myself up to my knees in a pile of various maternity jeans I had ordered online. Most of them were terrible and got sent back. They were all uncomfortable and seriously ugly. Fashion is not kind to pregnant women.

As a result, I spent nine months hating the act of dressing myself –– once a daily source of joy. Intellectually, it’s not hard to comprehend the strange body dysmorphia that occurs during pregnancy. But, emotionally it can be difficult to reconcile. While growing a baby, the body expands and changes faster than your feelings can catch up, which makes any slight glance in the mirror a jarring experience. Conversely, postpartum can feel equally shocking. Just when you get used navigating a belly and having a creature kick you all day, it disappears in an instant –– leaving you deflated and feeling phantom movements for months.

This time around, I still desperately miss my jeans, but I’ve surrendered to this period of time in a way I wasn’t able to the first time. Maybe it’s because having done this before, I have a new perspective on its ephemeral nature. Perhaps it’s because the pandemic and my freelance work have kept me housebound with little reason and occasion to tap into my wardrobe. It could be because I found some non-maternity dresses and jumpsuits that make me feel somewhat normal.

Whatever the reason, I’m grateful that my brain is not dragging my body through such a redundant, and futile exercise for a second time. It’s one of the only nice things about this pregnancy so far.

Actually, let me walk that back.

Everything about my pregnancy, physical]y has been pleasantly mundane –– save for that week I was admitted to the hospital twice and ultimately ended up in emergency surgery for an insane nose bleed. But, aside from mild morning sickness, heartburn, and some back pain, so far it’s been completely healthy. Also, for whatever reason, my skin has really been banging –– which is always worth celebrating.

But, emotionally, it’s been less than a glowing experience.

Second pregnancies are, by nature, just different. You hear that, friends with multiple children? You were right.

From everything I’d heard, I knew this was going to be true, but like most life altering experiences –– you gotta see it to believe it. The overall experience is a whole lot less magical. At the end of a first pregnancy, it’s not just a baby who is born, but also a mother. Every milestone is a moment to be celebrated. Each flutter is worth documenting. The world helps you gently transition into this new role with gifts, advice, insistence that you rest, and massage gift certificates.

The second time around, there’s no time to feel pregnant. You breeze through tests, appointments, benchmarks, and often forget how many weeks along you are. Your first kid still demands the same amount of draining attention, perhaps even more because somehow they sense it’s their last chance to soak it up. And, they’re right, which brings you to tears every time you think about it. There is no lying down, feeling sick, pampering, self care, or daydreaming. Barely anyone calls to check in on you. If I had a dollar for every time someone told me, “Oh, I keep forgetting you’re pregnant,” I’d be able to buy myself something nice –– or at least one of the more expensive things on the registry I made that I’ve been using like a shopping list, because Omicron has made a baby shower impossible and irresponsible.

I actually just confirmed that if I am admitted to the hospital and test positive for Covid, then I will need to labor in isolation and deliver without my husband. I don’t even know if I would be allowed to see the baby right away. Though I am no longer acutely afraid of getting Covid or becoming ill, as a fully vaccinated person, I am terrified of this happening. Whatever last few weeks of “freedom” I had, have now become a jail sentence. It seems like outdated protocol, considering healthcare workers are being forced to come to work while also testing positive, but it’s not my decision.

I fear that I’ll look back at this time like a fever dream, wondering if it even happened at all. I’ll look at my daughter, baffled at how she arrived. I’m ready to not be pregnant anymore (I miss those damn jeans and my hips hurt!) but I know I’ll miss feeling her move. I’ll miss feeling superhuman. I didn’t take enough bump photos.

It’s not just uncontrollable external factors like the pandemic, or even the completely normal dulled experience that comes with second pregnancy territory. A lot of my feelings of unease, anxiety, and deflation are really just … me and my own dumb expectations.

This pregnancy was a complete surprise. And, that alone has put its own filter on the experience. Having been told I’d never get pregnant without intervention my whole reproductive life, a positive pregnancy test left me with a level of shock and overwhelm that has eclipsed any feelings of excitement, joy, and anticipation. I’ve had to spend so much time adjusting my expectations, that it’s been difficult to be present in the moment –– something I know I will regret once she’s here.

Most mothers I know with one young child will talk about having a second like it’s a given. “Oh, I’ll just save that for baby #2.” That confidence in knowing it’s what they want has always taken me aback. I’m envious of their assuredness. As an only child, I don’t know anything beyond a dynamic of three. I wasn’t one of those single children who pined for siblings, and only having one of my own never seemed strange or bad. After having my son, and entering a pandemic, my ambivalence over having more than one was stronger than ever. I really didn’t know if I wanted more. Not only was my parenting experience challenging, lonely, and small, but I found myself feeling fulfilled as a mother. Another child wouldn’t make me feel any more like a parent. Even if I did have a second, I knew I’d want a wider age gap than most.

Best laid plans. I don’t know why I’m surprised. My first pregnancy was forced to end three weeks before I had anticipated, and who could have ever predicted a pandemic? Babies have their own timeline, and you need to respect that.

It’s not just babies who are on their own schedule.

The moment I found out I was pregnant, I started putting a kitchen remodel into motion. If we were going to cram a fourth person into our very small house, I needed a new kitchen. This isn’t about aesthetics; it’s a functional issue. Could you deal with this sink from hell?

I applied for a line of credit, found a contractor, and we submitted out plans to the city for approval in September. New kitchen. New baby. Boom. It seemed miserable to go through a 5-6 week kitchen remodel with a toddler, but doable. I was prepared and it was going to be worth it. All my nesting energy went into this project.

Except… it’s now mid-January (somehow) and our permits have not been approved. This kitchen isn’t happening before we have a baby. As December days moved forward, the reality that this plan wasn’t happening sunk in. I felt defeated and so angry. How were we going to do this with a newborn? Surprise pregnancy. No maternity leave. No jeans! Covid hell. And now… no kitchen, the one thing I had been looking forward to getting done.

I find my anxiety manifesting in solving problems I haven’t yet encountered, focusing on a rolling snowball of projected logistical roadblocks. Will we even get to fix our kitchen? How will we manage with two kids? Will they wake each other up at night sharing a room? Can we afford childcare? Being an only child, I can’t fathom a family dynamic of four and I’m nervous I won’t know how to nurture a sibling relationship. I feel like I’m just getting to know my son, and soon I’ll have to divide myself even more than I do now –– and that feels like impossible math.

But, the kitchen will happen –– eventually. And, I’ll figure it out. I went from no kids to one kid and adjusted. There’s nothing that would indicate I can’t do it again. The gift of the second time, both in pregnancy and parenthood, is perspective and knowledge. I can prepare more and care less. I’d be lying if I didn’t admit I was a little excited to get a do over, knowing what I do now. Instead of just letting my encyclopedic knowledge about baby sleep schedules seep out into unsolicited advice to other new parents, I get to put it into action. I’m terrified of the sleep deprivation, so much more this time, now that I viscerally have muscle memory. And yet, I can take comfort in knowing how short-lived every phase is.

I hope that I can use that perspective to be more present, and enjoy aspects of babyhood that felt like an exhaustive blur the first time. Knowing this really is the last chance I’ll get to experience every age and stage, I want to make an effort to find joy where I couldn’t before.

No matter how many anecdotes you hear from veterans who’ve walked the path before you, it’s hard to not still build and come to depend on your own expectations. Even harder to accept when they inevitably get broken. But, even more lovely when you never had it right in the first place.

I’m very much looking forward to being wrong.