A few months ago I published an essay on Refinery29 about my personal journey with PCOS (Polycystic Ovarian Syndrome), AKA my potential overshare of an emotional and physical roller coaster without my period for a year and a half.

Some of you may be wondering, why did you put your period on the Internet? No one needs to see that. Many of you may be thinking, that’s about all I probably need to know about your uterus, but thanks for sharing. If either of these perspectives resonates with you, you might want to skip this post.

CAUSE I’M GONNA TALK MORE ABOUT MY DANG PERIOD.

This is because I finally got it. After almost two years of not getting it, all I want to do is shout it from the rooftops or send a press release at the very least. I’m going to have to settle for this blog. If it’s not for you, skip ahead for some career advice or whatever. Ok, so here we go:

During my moon cycle draught, I had three different gynecologists tell me to go back on birth control. Their main concern was me getting a period, but I knew this was not solving the underlying issue. Why would I want a hormonal bandaid? I barely use the ones I have in my medicine cabinet and they have Hello Kitty on them!

I allowed one of them to fulfill a prescription, and because they were free (what up ACA), I picked them up and stashed them under the sink. I decided that I would give myself until the end of the year, two months after my wedding so my body could chill out, for my period to come back. If not, I would go back on birth control.

On Christmas Eve Day, my husband I decided to clean out and redesign our bookcase. Well, I decided we were doing it, and he went along with it because he’s a good husband. It took hours and we bickered most of the time, but we agreed to go to a friend’s house for dinner because she was cooking Romanian food, in honor of her Romanian dad being in town. It was delicious. I ATE EVERYTHING. On the way home, my husband and I ended up arguing again and I broke down crying.

Maybe you don’t know me but…I don’t cry. Really, I have a good quarterly cry and that’s about it.

“What’s wrong with me?” I asked through sobs.

“I don’t know, but you’ve been really nitpicking me all day,” my husband said.

“I’ve just been irritable, I guess.”

Irritable. I never use that word. NO ONE uses that word unless they’re referencing …

I was irritable, had just eaten my friend out of house and home, and was no crying my car for no reason. “Maybe I’m getting my period.”

“Yeah, maybe.” But, I know he didn’t really think so. I’d said that A LOT in the past 20 months with nothing to show for it.

I really did feel like I was exhibiting the classic signs of PMS, but then again, it was Christmas Eve. The symptoms for menstruation and the holidays are interchangeable.

A couple weeks later, we left to spend New Years with some friends in San Francisco.

On New Years Eve day, I woke up feeling like I had cramps so I said, “I feel like I have cramps.”

He wasn’t being insensitive, it’s just…I was the girl who’d cried “period.”

Well, the cramps kept getting worse all day, and my hopes kept growing bigger. I refused to take an Advil because I had to see how this played out.

By the time it was almost time to ring in 2018, I went to go pee in the in million dollar walk-up apartment where I was attending a friend of a friend’s New Year’s Eve party. I had spotting. I almost cried.

But I didn’t. Because like I said I don’t cry, not even for the story.

The next day, I bought tampons for the first time in two years and it felt like the first time ever –– only way less embarrassing. I told my friend Olivia who congratulated me on my Ancient Period returning, which felt like a very apt name for it.

Obviously, when I got back to LA, I did two things: went to see my acupuncturist and my tarot card reader.

My acupuncturist stuck me with needles and put me on a bunch of pills to try and help regulate my cycle and sent me on my way. My tarot reader made me cry. Ok, so maybe now that my hormones are working, I cry.

I want to show you my reading: 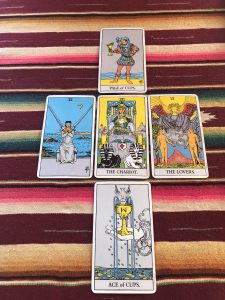 If you’ve never done tarot readings, it’s important to know that at the onset you’re supposed to ask the cards a question or at least ask the desk for a specific area on which to focus. In every reading I’d received before, I’d ask about creative or career pursuits. But at this time, I was about to start a brand new job and launch this blog, so I decided to ask, “What movement will I see in my home life?”

She started with the center card, The Chariot. She told me that the Chariot represented balance, strength, but often movement –– often translated into a physical move (FREAKY). The Lovers card indicated that whatever this movement was, it was to impact both me and my partner in a positive way. The Two of Swords represents a difficult decision without enough information, but the balance signifies she’s not listening to the haters. She’s following her truth. (Hello, ignoring all those doctors in favor of my gut!)

Now, before she got to the top and bottom card, she looked confused, and then inhaled, “Are you trying to get pregnant?” I let out a weird guttural noise. “Or, are you pregnant now?”

DISCLAIMER: Now, let me say, our tarot reader has given both of us readings in the past and we hired her to entertain guests at our wedding. So, she knew we’d just gotten married, so it wouldn’t be TOO unreasonable to bring this up but…still. This week of all weeks to get this reading.

I started to cry a little as I told her about my journey (which she did NOT know about).

Both cards were in the suit of Cups, which represent emotions. The top card, The Page of Cups, often represents children or news of a birth. It also indicates beginnings, and enhanced emotions (AHEM, CRYING). The Ace of Cups. The bottom card, The Ace of Cups, can indicate the beginning of a relationship founded in love, and often points to fertility –– whether that’s literal or a creative venture.

So, what does it all mean?

Could be everything or nothing at all. Regardless, it felt like an uncanny event.

I’m not trying to get pregnant right now, but I suppose one of the primary goals in trying to beat my body at its own twisted game of hard to get is fertility –– at least to have the choice on the table on my terms.

My Ancient Period was a great sign and motivation to keep listening to my body. I feel hopeful, and at the very least, I’ve learned so much about my body, women’s bodies, and the human body at large during this whole process. You know what? It’s just as gross as I originally thought.