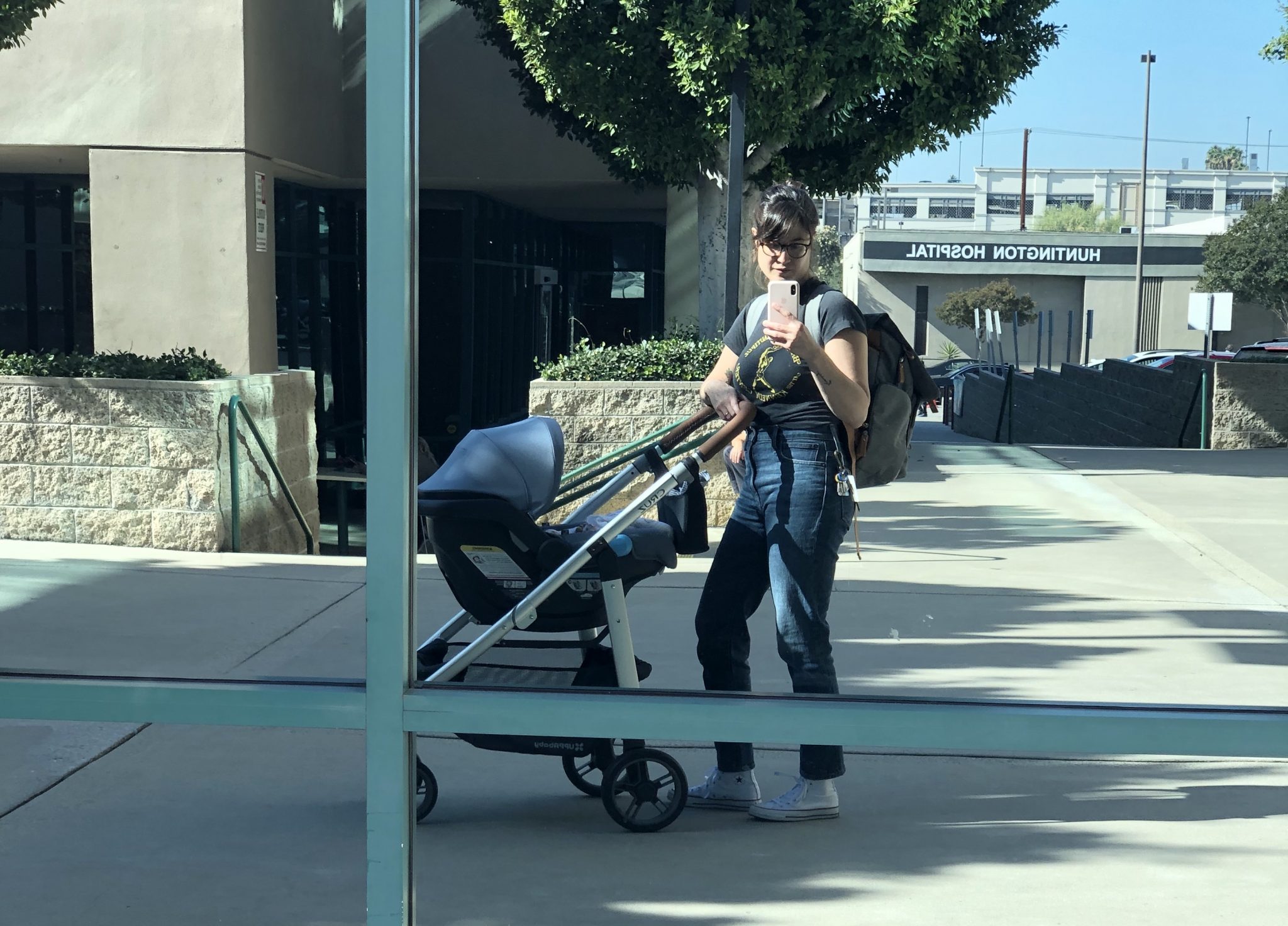 The other day while in line to check out at Whole Foods, a woman behind us noticed the baby I was wearing. “Enjoy. It goes by so fast,” she warmly advised as she side smiled at the thirteen-year-old helping unload her cart onto the conveyor belt, wistfully remembering when her baby had feet as small as mine.

“Don’t worry, it gets better,” a man said a few days later, on his way out of a friend’s house party, carrying his one-year-old horizontally like a sack of potatoes.

Well… which is it?? Am I supposed to soak in all the quiet moments at home or muscle through the repetitive newborn drudgery?

I’ve been a mother for two months and I still can’t really say I identify with the weight of this life-long label yet. Instead, I feel like I’ve been cast in the leading role of a one-act play with performances about eight times a day, seven days a week. It has a run time of about 45-120 minutes and is rated PG-13 for mild profanity and female nudity. You can expect naked boobs, diaper changes, burping, crying, wailing, pacifying, rocking, and some terribly butchered song lyrics from some really fantastic songs. Spoiler alert, it ends (hopefully) with a sleeping baby. After the show, I strike the stage (couch) and reset for the next showing in two hours. The reviews are in and the critics say it’s “not groundbreaking.” To be fair, every show seems to be pretty hit or miss.

No one really talks about how strange it is to spend nine months watching your body change, mentally adjusting to the idea of creating a new human, only to suddenly not be pregnant anymore. What an odd sensation it is to instinctively sit up straight in your hospital bed when for months you’ve had to roll to your side. Feeling a previously dormant abdominal wall, bending over effortlessly, and running hands over a bumpless tummy in the shower all feel foreign. It seems like something is missing when really it’s just been displaced. And now, after going through the most physical feat of your life, your body and the new little body you made, demand you adjust once more.

The first two months have been a quiet blur of diaper changes, severe nipple pain, and falling asleep playing Candy Crush, ordering breastfeeding odds and ends on Amazon, or repeatedly Googling when my newborn will sleep through the night at weird, delirious hours (even though I keep getting the same answer every time). Being on near house arrest for two months will cause you to lose track of time and the number of prestige television shows you’ve blazed through like wildfire.

As someone with a reputation for taking on at least five jobs at a time (at all times), I attempted to tackle this major recalibration by considering it a different type of exhaustive stimulation. And, that much has proved true. My day planner — which once used to organize meetings, errands, happy hours, trips, and creative projects — has turned into a place to track doctor’s appointments and daily to-do lists that include reminders to “make the bed.” I’ve spent an inordinate amount of time watching babywearing tutorials and practicing with stuffed animals. I don’t want to know how much time I’ve devoted to determining if my baby is going through a cognitive leap or needs to fart –– or both.

I feel as though I traded one type of chaos for another. They’re both exhausting and able to fill your brain to the brim, but the contents are different. Imagine removing the constant pressure of juggling work, social obligations, and personal pursuits and replacing them with only one thing –– keeping your baby alive. This one singular, monumental task is challenging my intense independence in with a quiet, slow, and simple sort of stress.

I’ve been asked how I’m handling such a seismic transition. I have nothing to compare it to, but yes, it’s super strange. Wholly natural and unnatural at the same time. I barely recognize my life anymore.

I went into this whole newborn thing with complete surrender, accepting that I wasn’t going to leave the house for two months, and nothing much was to get done, aside from diapers, breastmilk, and naps. I decided to lean the fuck into monotony and stillness as an attempt to control how I handled the uncontrollable. Searching for social stimulation and fighting sleeplessness seemed like a recipe for anxiety, and I still think that’s true.

It is, most of the time, kind of boring and exhausting. Is that OK to say? I still love my baby, I promise!

No, I’m not sleeping well. Stop asking me if I’m sleeping. I have a newborn. Newborns don’t sleep well, so parents don’t either. We all know this. How are YOU sleeping?? Why is everyone so afraid of not sleeping? People inquire about my sleep schedule with the sick fascination of a bad date. I’m not a car crash on the side of the 405!

Don’t feel bad for me! Don’t be concerned! IT’S JUST SLEEP. The newborn phase is really a matter of a few months. I’ve stayed at jobs that made me miserable longer than this will last, and I’m not even remotely miserable. I’m just tired! Really, really tired.

There is such irony in the close proximity to my bed and still being sleep deprived. The complexity of my emotions is at odds with the simplicity of my daily tasks. If I leave the house I forget I have a baby, and when I’m at home it feels like he’s always been there. When the baby is crying I think he’s dying; when he’s too quiet, I also think he’s dying. I’ve known this new person for two months, and he’s known me his whole life.

But, like the woman at Whole Foods prophecized, it will go so fast. I believe her because what little time we’ve had together has already passed without me even realizing it. My emotions bested me while packing away his preemie-sized onesies, and my heart hurts every time I scroll back through my phone and look at the hundreds of pictures from the first few weeks. He changes so much day to day that I find myself in a perpetual state of nostalgia for the previous week.

Not recognizing my life isn’t necessarily a bad thing. I had a solid 12 years spending my weekends the same way, caring about the same problems, and looking for meaning in all the same places. I’m ready to move on and concern myself with something other than me and every mild stomach ache. It’s not that all of that is entirely gone; it’s just been shuffled around to make room for new priorities, activities, values, and growth.

Still, I’m me. I’ve always had a strong sense of self, so an all-consuming sense of motherhood was never in the cards for my identity. Love, at first sight, was never going to be my birth experience. In fact, I think the first thing I said when they laid him on top of my chest was, “This is what was inside of me??” Not terribly romantic, or maternal, but completely me.

Instead, my new role is doing what I had hoped, helping to shape what was already there, not replace all the strengths and flaws. I still find time to write, work, get a manicure, have an intelligent conversation about anything other than breastfeeding or sleep. I can do this because I have two strong supporters: my partner and my old self.

Sure, I don’t do these things as often as I used to, or even as often as I’d like. But, I’m finding joy in the new things, the quiet moments, and learning about the world all over again through my kid. Like all good relationships, we’re taking our time to fall deeply in love and build a connection.

Besides, I’m told that it doesn’t last long, and it definitely gets better.