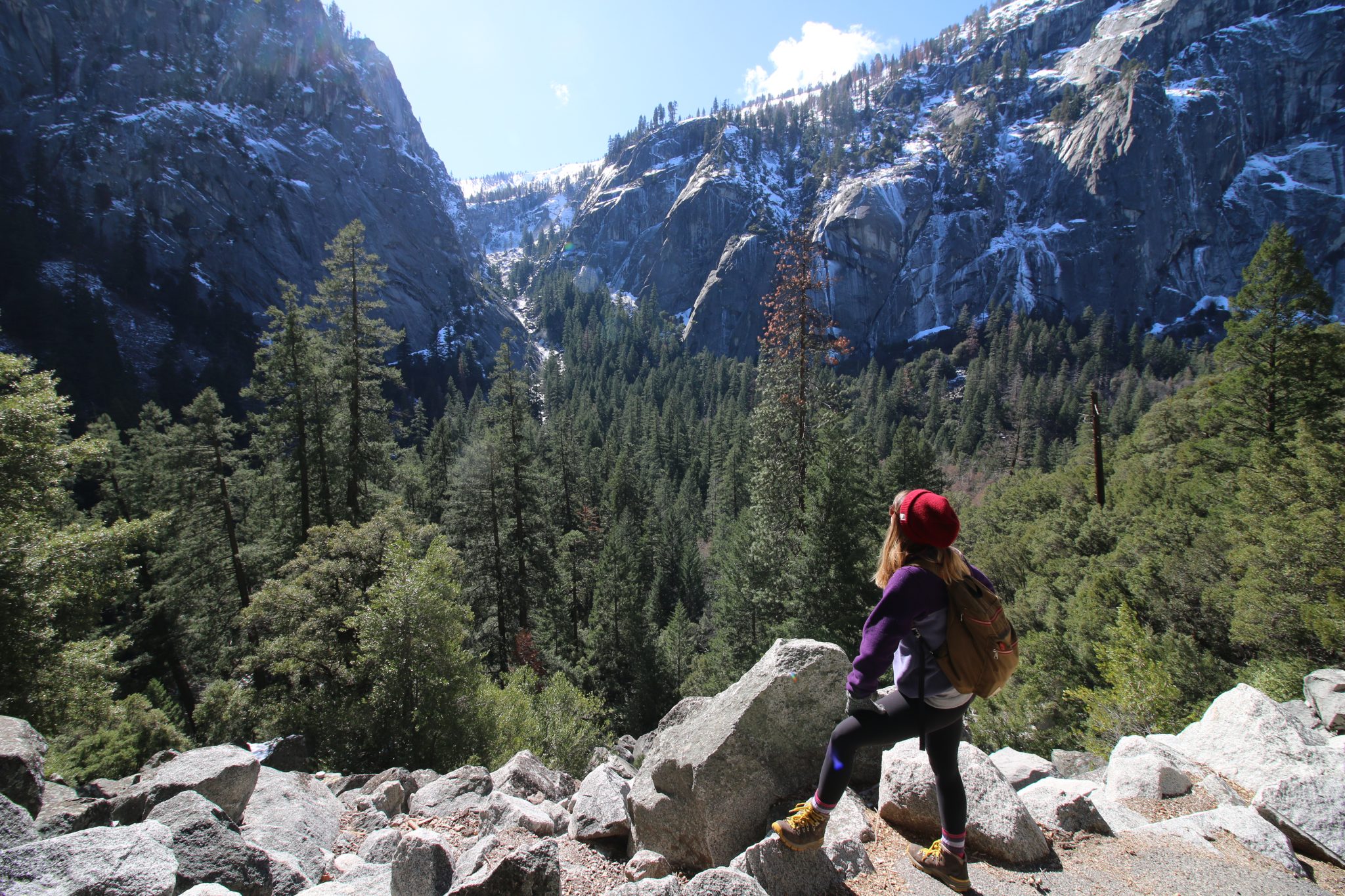 A couple Saturday mornings ago, my husband dragged me off the couch to check out the REI Garage Sale at 8 am. I was hesitant to go without any specific items in mind because let’s be honest, this wasn’t my first sample sale rodeo. I know how these things go. When there’s no clear plan of action, everything on sale feels like a great deal begging to be taken. And damn it feels good to get a great deal! It’s tempting to see yourself in all the reduced merch.

Sure enough, we rolled up at 8:00 am, squinting in the already bright sunlight as we lined up to browse mildly damaged outdoor gear. I looked at the other people in line, wearing Tevas and slept-in braids. Could I be one of them? Was this me?

Walking into an REI, they make it pretty easy for you to envision the outdoor version of you. Camping, backpacking, kayaking, skiing, biking, and more. Layers upon layer of cozy, chic fleece and merino wool and slick state of the art gear that folds in on itself to fit in your pocket. It’s enticing to see all the alternate models of your identity that (a lot of) money can buy. I thought of all of them as we passed through the shelves and displays to check out. We sensibly walked out with a hip pack and one pullover mid-layer for me. An hour later, I forgot about outdoor me.

A few months ago, I wrote about wanting to want less. In general, I was speaking about the wanting of the material things, but recently I’ve been mulling over more. What do the things mean? What do they help us present? Who are we wanting to be in wanting the costumes and props?

I dated someone who was in constant in evolution with his identity –– style, interests, and even his friends. It seemed exhausting to be honest. Throughout the time that I knew him, he must have tried on three different personas, and after we broke up, I watched him transform again and again from afar. It was hard for me to relate because I never had a desire to change myself in that way, so dramatically.

Self-reflectively, of course, I’d say I’m someone with a strong sense of self –– I’ve always known who I am, what I stand for, and what I believe in. And yet, I’ve gone through so many phases in my life, often several in one month. I’ve wanted to be so many people throughout my life. Gap kid, surfer girl, Abercrombie prep, Anthropologie polished, rockabilly pinup, emo scene star, Madewell tomboy chic, indie designer scout –– and that’s just my personal style.

I’ve romanticized so many types of lives from badass corporate boss to starving artist. I’ve wished to be someone who cared less, and someone who cared so much more. Someone with everything and a person who needed nothing but a tent and a nice view.

And, I like myself! I love my life. It’s rich. It’s full. It’s so much more than most people ever get a chance at having. Yet, I can’t help wanting to be someone who had a skin care regime and a jade roller, even though I know it’s all a bunch of marketing bullshit. The person with the face masks is somehow better than me. Maybe, healthier than me. Probably with less hormonal acne than me.

Wanting to be other people feels like a simultaneously learned behavior and a wholly innate desire. It’s a nurtured impulse in that I’ve been taught to want to be like the people I see on TV, read about in lofty New York Time’s profiles, discover on Instagram, or hell even just passing me on the street. Is it weird to ask where she got her boots? It’s a fundamental human glitch; we’re all wired this way. It’s so universal; no culture or generation is spared from this deeply seeded want for more, a different life.

There must be a Darwinian advantage embedded in this knee-jerk reaction we all have. Is it to have more resources? Be more comfortable? Or even to assimilate into our surroundings? Or maybe it really is as simple as, the grass is always greener. Absolute satisfaction in the self is an impossible Nirvana.

After all, this is the part of the human condition that Buddhist monks have released from their lives. That’s beautiful and all but, there’s a reason most people are nowhere near enlightenment. It’s really hard, and certainly not much fun to get there.

Though I believe this feeling has long been part of the human condition, it’s only grown worse since the mid 20th century, when consumerism started to rise –– along with the advent and accessibility of credit cards and television advertising, AKA the middle class. It’s now at a raging high with social media. What was once reserved for lusting over the models and celebrity elite in magazine editorials and glossy advertisements from afar, is now seemingly so tangible in Instagram influencers. Whether it’s mommy bloggers, lifestyle experts, wellness gurus, or just people who bucket themselves as vague “creatives,” these are everyday people…right? I should also be able to have all these things to make a picture-perfect life too –– including pristine living room decor, fresh matcha smoothies every morning, and every piece of sustainable, organic clothing ever. That’s what we’re being told, but it’s just not true.

Weeks after my adventures in REI, I found myself at the other end of the persona spectrum at another sample sale for a very high-end designer at the recommendation of one of my friends, whom I haven’t seen in years, through Instagram after I complimented her bag. I knew it was trouble from the get-go. She’s one of the effortlessly cool and beautiful girls who has-it-all but is also really great and down to earth so it’s impossible to hate her. But, sigh. I am a masochist with nothing to do on Friday evenings. One hour and five bags on two shoulders later, and I was distraught. I didn’t know which tote bag was right. I hadn’t come with anyone and was not dressed for a Beverly Hills experience. Looking like a disheveled college student, I latched onto the nice sales girl and the young man as proxies for my real friends, pleading with them for opinions. They indulged me because it is their job. 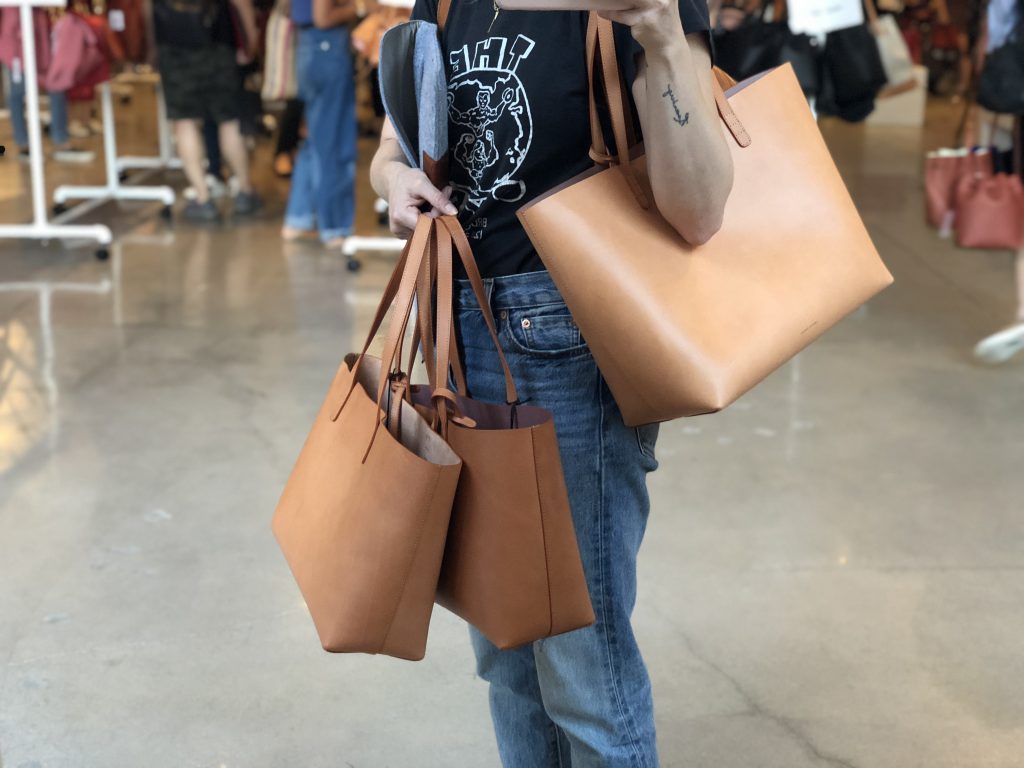 Who was I? Was the large bag too “mom?” Was the black tote too “finance?” Could the natural leather look “preppy?” Were any of these bags really me? Did I even need any of it (of course not)? This is what’s wrong with America; I don’t want to be a part of this.

I was mentally spiraling as I floated through the space like a zombie with several similar tote bags attached, stopping at mirrors to scrutinize the presence I was trying to project while trying not to get yelled at by the staff for letting the bags touch the ground. Unable to make a decision, I bought two bags with the intention of selling one, or both. Who knows? Certainly not me.

I know I’m not alone in this. I know I’m not the only one whose irrational wants leave them achy in the chest, or with an urge to throw out every piece of furniture in favor of the millennial marble tops, dusty neutrals, a million house plants, and zero personality I saw in my social feed to become a new, minimal, breezy me who enjoys old records (I do), expensive candles (I don’t give a shit) and doesn’t kill plants (…). I know I’m not the only one who feels guilty for wanting material things, and even more so for wanting to inhabit the slivers of other people that may or not be real. Stuff is just stuff, and there is no persona that will fit you best but the one you already have.

It’s much easier to want what you don’t have than to want what you do. We’re programmed to hunt and gather. Maybe in a 21st century, domesticated first world country, this is how it’s expressed. We’re hunting after a different life, and gathering all the stuff to try and make it happen.

I left the sample sale, totes it tow, and made a pit stop at The Grove –– the outdoor mall of my formative years –– to grab a new laptop case for my work computer. As I wound my way up the familiar parking structure, I called my best friend who now lives in Chicago. “I’m at The Grove and you aren’t here,” I whined.

“What are you seeing?” She immediately asked. There were a couple years of our twenties where most Friday nights were spent at this mall.

“I’m not seeing a movie. I’m just going to the Apple store.” We chatted as I parked and walked into the mall, now mostly unrecognizable, as new shops have popped up and replaced old haunts.

As I drove home, I passed through my old neighborhood where I spent most of my twenties. It certainly didn’t help that I was listening to a playlist curated by my cousin with music from said formative years, but I felt such an overwhelming rush of nostalgia and sadness. I ached to be transported back to that time, when I was 22 or 26, experiencing adulthood for the first time, and feeling more grown up than I was at every dinner I probably couldn’t afford.

I realized, the one person I want to be the most is impossible. No matter what products or clothes I am able to slap on a credit card will never allow me to be the person I most long to be –– my younger self. I’ve always struggled with change and the passing of time. If you’ve been with me for a while, you’ll know I ran a whole damn blog dedicated to the subject for many years.

Though, maybe I feel that way, not because it was such an amazing time in my life (it kind of was), but because I’ve been conditioned by media and advertising that young is good, old is bad. Get a jade face roller.

It’s an ongoing battle, the wanting. Becoming a Buddhist monk isn’t really an option so, the best I can do is remind myself that my life is great, Instagrammers don’t have it perfect, you can’t go back in time, and stay the hell away from sample sales.