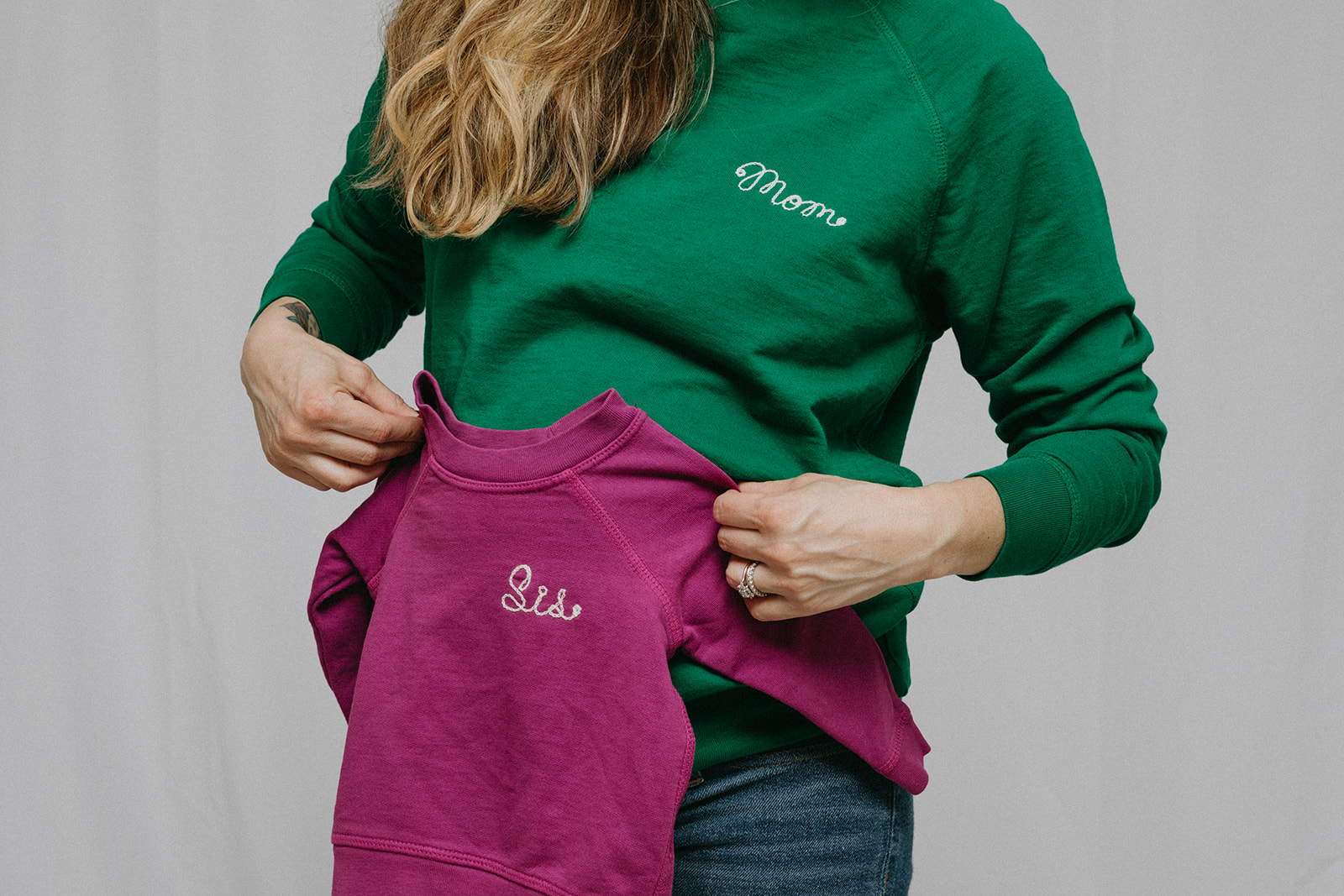 Well before I ever got pregnant, I always assumed I wouldn’t want to find out the sex until birth. I love anticipation (says the girl who intentionally had an 18 month engagement) and this felt like the penultimate experience. Later, as I lurked around pregnancy forums, I learned that this was referred to as “Team Green.” In other words, not “Team Pink” or “Team Blue.” Green is genderless, I guess?

It’s often said that waiting to find out the sex of your baby is one of the last wonderful surprises left in life. It’s certainly a narrative I repeated to many, incredulous friends, family members, and even strangers, in a weird attempt to justify a decision that required me to do no such thing during my first pregnancy.

It’s sort of true. Despite the incredible genetic sequencing available, IVF techniques, and 4D ultrasound technology, so much of a pregnancy remains a mystery until birth. People are grasping at whatever information is available to anchor an abstract idea of a baby into a not too distant reality. Finding out the sex of the fetus falls into this narrow bucket.

When I did become pregnant the first time, I opted for early genetic screening that also allowed me to find out the sex of my baby as early as 10 weeks, but I declined that specific information. My husband and I were instructed to close our eyes at various points during the anatomy scan as to not see what I now know was a penis. We came to the hospital with both a girl and boy name.

It really was so much fun to be surprised. Even now, over two years later, I enjoy reliving memories from that pregnancy in a completely new way now knowing it was my son the whole time. 10/10 recommend the experience.

However, it was during my first pregnancy that I realized how fixated other people were with the sex of my baby. “Do you know what you’re having?” was the immediate follow up after, “Congratulations!” It’s the prenatal equivalent of party small talk, “What do you do?”

When my response was some version of “We’re waiting to find out,” I was usually met with one of the following responses:

Based on the response, I wasn’t sure most people understood how human gestation works. Eventually, in a few short month’s time, you will find out. And no, decorating a baby room is not hard, and neither is buying clothes.

But it goes beyond impatience and an attempt to assert control over the uncontrollable through baby gear.

Gender disappointment is a legitimate term and topic of conversation in the trying to conceive (TTC) and prenatal world. Women are often devastated by the news, one way or the other, layered with guilt over caring about such a thing in the first place. Couples will often try to impact the gender outcome of their baby while trying to conceive through timed sex during ovulation, positions, diet, and supplements. And I recently met a woman with a four year-old boy who told me she was probably going straight to IVF to make sure she had a girl. She had to have a girl, she said.

We can intellectually declare that gender is a just a construct all we want, but clearly it still matters.

Even as someone whose baby registry was a sea of grey items, and ultimately didn’t care either way, I’d be lying if I told you I didn’t think about it frequently throughout my first pregnancy. I’ll even admit that I had a slight favorability towards having a boy, which led me to convince myself I was having a girl as to avoid disappointment –– even though every sage Latina and Asian woman told me it was a boy towards the end. They were right. “It’s… not a girl!” My OB exclaimed on my final push. (For now, I will let him tell me otherwise if that’s how he feels.)

Now in my second pregnancy, I debated being surprised again. There is nothing like finding out something wonderful, either way, at the end of the hardest physical experience of your life. To truly meet your child for the first time, in every possible way, is unparalleled. But, ultimately, I decided that I had already had the experience of not knowing. It might be cool to try something new.

Besides, though not finding out the sex is fun, exciting, and prevents you from projecting any of your own bullshit, there are some drawbacks. I don’t know if it’s my personality, being a first time mom, or not having anything concrete to fill my imagination, but I felt fairly disconnected from my first pregnancy, and that feeling carried through the first few months of motherhood.

This is also super common for many women, so who knows!

Having a toddler who would need major preparation felt like the biggest factor in feeling like the right choice was to find out this time. So we did, and it’s a girl.

I wasn’t prepared to have another baby, period. And, I definitely wasn’t prepared for the comments people make when you actually have an answer to the inevitable question.

My girl?? The assumptions!

It’s not just me. I recently ran into a new mom friend who is having her second girl. She told me that upon sharing the news, people have immediately asked, “Oh are you going to try again for a boy?” Yes, before this baby is even born! And, honestly the ultimate cringe, “Dad better watch his wallet. Girls are expensive.”

As evolved as I’d like to think I am about sex and gender, I’ll be honest; I was very mildly disappointed in finding out I was having a girl. I had been hoping for another boy, despite having zero boys names I liked. All parenting in a pandemic is hard, but new parenting in these unprecedented times is –– well –– unprecedented. All I’ve ever known as a parent is fear and isolation. Somehow, despite the circumstances, I’d figured out how to be a mother and I was scared to fuck it up. Best to keep the homeostasis. I know how to be a mom to a boy. I get my son. I was hoping to just order what I got last time. I know I liked it!

I was a girl, and I have a first-hand understanding of how raising one could be challenging. I was, and probably still am, a handful. And that that scares me.

This is all … a bit irrational. My child is not me. I don’t need to a raise another me, and nor could I, even if it’s what I wanted. Nature can be very strong willed.

In general, it’s easy to dismiss people for caring about giving birth to anything but a healthy baby. Intellectually, I think it’s silly. You’re meant to have the family dynamic the universe delivers and, whatever that is, will be perfect.

But let’s be real: we are all a product of our own experiences, good and bad. The way in which we construct boundaries and expectations for new situations are all based on previous relationships. The human brain is wired to process new information based on its relation to the old stuff.

Taking gender out of the equation, as an only child, I am terrified for two children –– whomever they are! I have no reference point for a family of four. I do not understand the sibling dynamic. The safe choice for me, personally, would be to have one child. That’s something I understand. I was always on the fence about more than one, especially considering my experience parenting in the pandemic. But, said universe has its own agenda. In a couple months, I’ll be swimming in uncharted waters.

Similarly, it’s not that I wanted a boy because I like boys better. It’s almost easier for me to navigate because it’s a blank slate without any baggage. My own mother-daughter relationship is tenuous and the blueprint for how to replicate it is not good. So, that’s daunting. Will I make the same mistakes? Conversely, women who have amazing relationships with their moms, might feel excited by the idea of recreating that experience with their daughters, and grieve the loss of an expectation that will never be fulfilled. It doesn’t mean they will love their sons any less, or find diminished value in the mother-son relationship. It’s just an adjustment, and still valid to be disappointed by any outcome you can’t ultimately control.

We don’t have to agree with people’s strong preferences and expectations, but I do think it’s important to be compassionate about why they exist. And, even though people say the darnedest things to pregnant women, they’re usually just trying to connect with you –– even by reducing your complicated feelings into terribly inaccurate assumptions and stereotypes.

So, even though I happened to be done having children no matter the sex of this baby, I did get my girl –– whether I was expecting her or not.