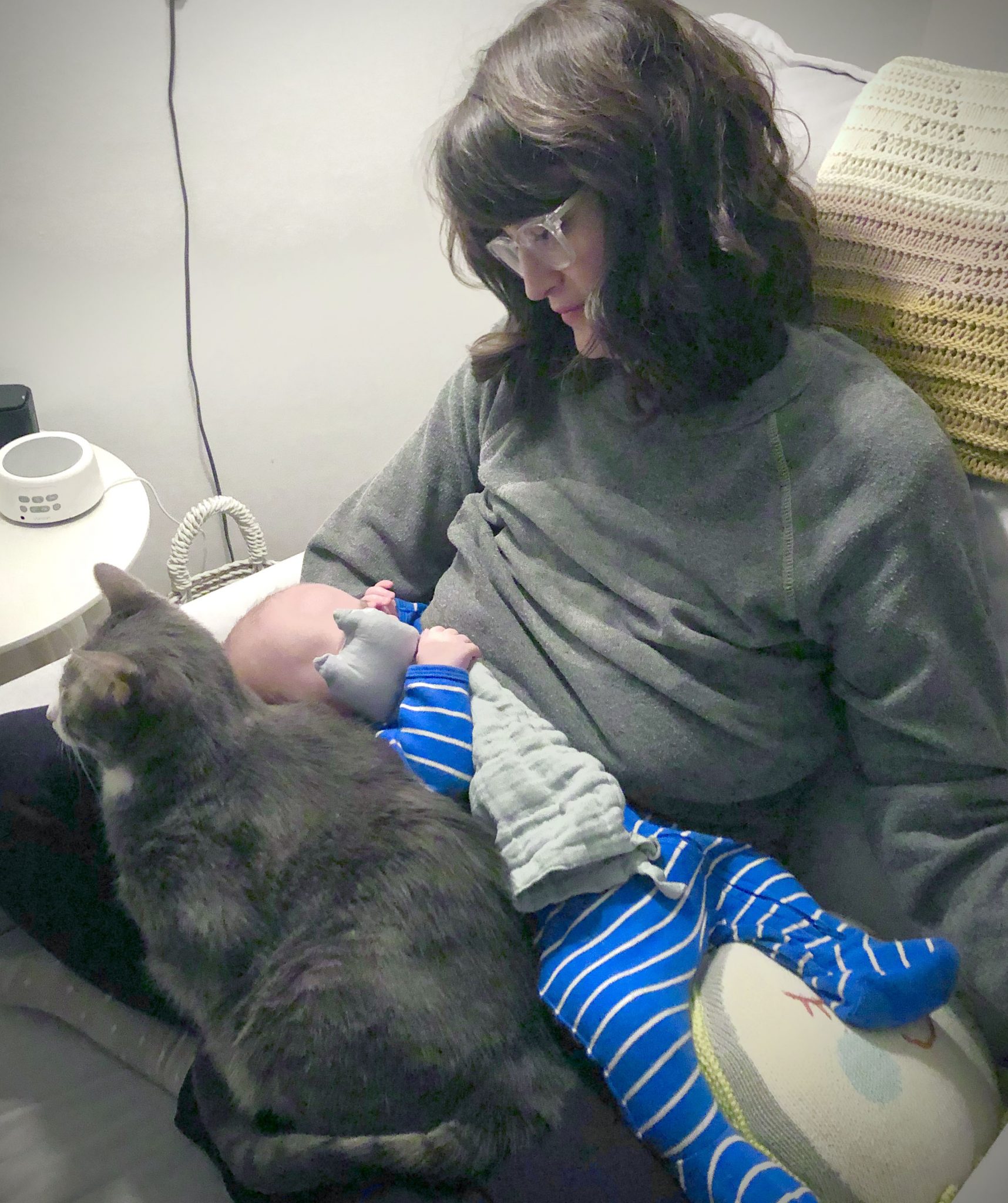 In a way, it was nice for us both to make our independent decisions after they’d already happened. There wasn’t any build-up, disappointment, or big emotions. Out of curiosity, I offered to nurse him about a week after he started refusing and, though I’m sure he didn’t mean it, my son laughed in my face.

It’s ok, it’s impressive we made it as far as we did. Like most new mothers, my experience was painful, frustrating, disappointing, and fraught with critical feelings of inadequacy. It wasn’t anything like the Renaissance image painted during my pregnancy.

Almost immediately after the baby made his entrance, there were nurses pulling down the trap door of my maternity gown to encourage my newborn to latch onto my breast. Shortly thereafter, he was whisked away to the nursery to be fed after a dip in blood sugar. My husband followed him and the nurse, frantically texting his mother to grab the donor breast milk, my friend had given us, where it was being stored in a mini-fridge in my mother-in-law’s nearby hotel room. By the time the little bag of milk was retrieved, a nurse just looked at my husband, “We can’t accept outside milk.”

Of course, they couldn’t! That would be so strange. What were we thinking?

We were thinking about the scary handout from our pre-natal breastfeeding class that detailed all the wonderful nutrients, vitamins, and minerals found in breast milk juxtaposed with the evil corporate synthetics found in formula.

We gave him the formula.

As soon as I arrived in my recovery room post-delivery, another nurse barged in with a medical-grade breast pump on wheels with instructions on how to operate the device to stimulate milk production.

In an epidural, fentanyl, oxytocin, and cortisol fog, I nodded and fumbled with the awkward pump flanges while I tried to remain stoic despite the excruciating cramps that began each 20-minute session I was instructed to perform every two hours. The only thing I had to show for my effort was a meager few drops of colostrum. I was committed to breastfeeding, so I gritted my teeth as I breathed through the pain.

Two different lactation consultants saw me while recovering in the hospital. They each brought deflated hospital pillows to prop under my arms and showed me how to hold my son like a little football across my chest. They worked with both of us for well over an hour trying to maneuver my breasts and his mouth in perfect choreography. “This one wants to learn. I can tell he’s determined,” one consultant assessed. Apparently, he was committed to this practice too.

My milk didn’t come in for five days. He was tiny, born at 37 weeks –– fully cooked but a little al dente from a growth restriction that spurred an earlier than expected induction. His latch was terrible. I was engorged. We supplemented with the little bottles of premade formula the hospital had given us.

For the next few weeks, I Googled at all hours. I desperately texted mom friends. I read article after blog. I bought Hakka pumps and nipple shields on Amazon at 3 am. I took my son to the baby chiropractor. I hired a private lactation consultant who came to my home twice. I had a clogged milk duct that needed to be comedically relieved using a shot glass full of Epsom saltwater. I pumped and pumped and pumped and pumped whatever was left of my identity into oblivion.

Surely, I thought, this was the end of our journey. I had given it a real try. But, much to my surprise, every week he grew a little bit more and things got progressively easier as we learned this new skill together. Eventually, we didn’t need the formula, my friend’s frozen breast milk, or much pumping, and I became the mom who could effortlessly breastfeed without the support of a giant pillow, nipple cream, and tears. Slowly, I evolved into a real pro who could discreetly breastfeed during brunch and play Candy Crush with my free hand to stay awake during a 3 am feed.

While he was perfectly healthy at his small size, I was very imperfectly sleep-deprived, never getting more than two hours of sleep at a time for months on end. I decided to start officially supplementing with formula at five months to be able to start sleep training.

Despite supplementing, I still hadn’t given up. Introducing more formula meant more bottles than nursing, so I committed to pumping 3-4 times a day for several months. Shortly after I began this new routine, the pandemic began, causing me to feel even more pressure to keep going because of the real-time antibodies present in breast milk. I still nursed once a day to maintain the feedback between my baby and body to make sure those precious antibodies got made.

Eventually, my body started to grow more tired and my baby less interested. One day he stopped. And then I stopped. Who were we to each other now without one of the only connection points we’d ever known?

Ensuring babies are adequately fed consumes all new mothers’ lives. I was no different. But, when your baby arrives in the 1 percentile in weight, it can be a little more stressful. Being the sole manufacturer, provider, and distributor of your smaller than average child’s nutrition is a lot to bear. It’s incredibly time-consuming and tiring to run a breast milk factory for one demanding customer.

Much like work that gets carried home from the office, even when you are not engaged in the act of feeding, you are THINKING about it constantly. When did he last eat? How many ounces was it? How much should he eat in one day from one month to the next? It’s never-ending mental math.

It’s truly a full-time job, so you can see how two months later I’m left feeling like I quit a position that was no longer necessary. Two weeks after I stopped pumping and breastfeeding, I got my period. Message received, body! My year and a half experience of pregnancy and postpartum were sent packing. My uterus had to clean house and get ready for the next potential guest.

I feel relieved. For the first time since 2018, it’s nice to not have to choose outfits based on whether they are pregnancy or nursing friendly. Pumping is horrible, and I’m glad to be done with the damn contraption. I have my body back, which makes me feel light, free, and as close to like my old self as I think I’ll ever get. But, at the same time, I can’t help but compare myself to other mothers who never struggled with their supply, baby’s latch, or even developing a deep emotional connection to the experience. Even though neither my son nor I seemed to feel anything other than pragmatism about our breastfeeding relationship, I’m still left feeling deeply sad, lonely, displaced –– literally and figuratively empty.

If I’m being honest, it’s not the breastfeeding journey I grieve, but rather my pregnancy. Having to be induced early has always made my pregnancy feel like an incomplete experience. A project I hastily finished before it was ready. I never got to be so big I was begging for the baby to be born. I never felt the anticipation of those final days wondering when it would happen. Though I felt pain, my labor was medical and procedural and a bit of a drug-induced haze.

Breastfeeding is, in a way, an extension of a pregnancy –– an elongation of a period of specialness. I clung to it in those final months not just for my baby, but for my own benefit. I didn’t want to let go of the pregnancy I never got to finish. And, when I did reluctantly decide to end it, I didn’t just stop breastfeeding. After 18 months in a magically altered state, my body ceased being of the most respected service, it was no longer superhuman. I stopped being special. Who was I if I wasn’t creating life, carrying a child, or feeding my baby?

I was just me again. Only, I wasn’t just me, and it was no longer “us.” I was a new version of me with a separate individual in tow, and I barely knew either one of them.

So here we are, already reinventing our relationship before it’s really even begun, acknowledging different ways to emotionally and physically connect and finding new ways to be of service to each other. Luckily, it all still feels very incomplete.