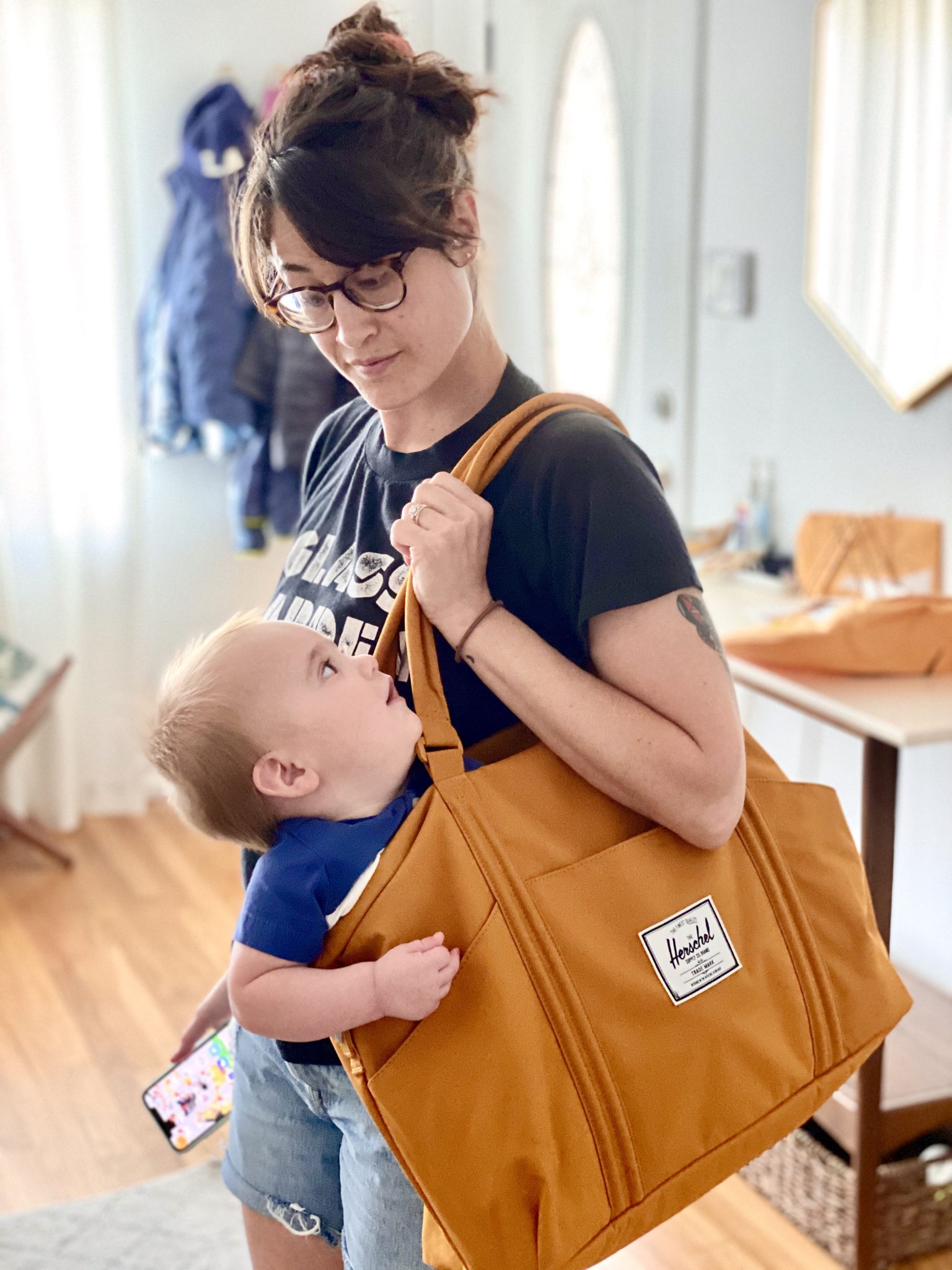 A week ago, we broke the seal. No, I’m not talking about giving into peeing during a night of drinking –– a term I distinctly remember learning in a gross bathroom at the SAE house during one of my first weeks at college. We popped our quarantine bubble by traveling to San Diego to stay with my husband’s family for the weekend. To the day, it had been three months since my husband and son had touched another human outside of our family unit. It was the first time in three months that someone had held my baby that wasn’t us. It was the first time in three months that the baby had been inside a building that was beyond the walls of our home.

We lasted longer than most but, with no end in sight, it was getting unsustainable for both of us to be working while also caring for an infant full time without any reprieve. In the beginning, there was a sense of solidarity that helped power through the monotony. The endless loop of childcare, singing Old MacDonald, getting drooled on, desperately trying to meet deadlines, take conference calls, and cleaning, and cleaning, and cleaning, and laundry. All the parents of kids at any age were struggling. No one had help, so it was ok that we didn’t either. We were all suffering a hell we could have never imagined, but at least it was together.

Prior to the pandemic, we had found an amazing babysitter to help us two days a week. We were just starting to emerge from the newborn fog, figuring out how to resume our lives with a new little person, when everything changed. We’re luckier than most other parents dealing with distance learning and temper tantrums, we would say. At least he naps twice a day. At least he doesn’t talk. At least he isn’t mobile. Three months later, which feels like years in baby development, he’s still napping, but babbling and completely on the move.

We were the last parents I knew that had yet to succumb to the siren song of grandparental help. It wasn’t a decision we made lightly, but it was a decision we made together, and precautions were taken. I have an unusually great capacity for drudgery, but even I was being pushed to the brink. For me to tell my husband, “I’m losing it,” carries some weight. We were both at our limit, and I feared our parenting was suffering.

We were excited to leave the tiny compound, where we’d made due for so long, but eager for a change of scenery, human contact, and extra hands to entertain our son. But, I worried! Not only about the *~*virus*~*, but about my son. As I said, he had not touched another person in three months, a third of his entire life. Would he be scared? Clingy? Would it all be too much for him? I know babies are far more adaptable than we give credit, but this was also a point in his development where he could potentially struggle with attachment (said one parenting app and several articles).

And what about me? As much as I complained about being touched out 12 hours a day, would I be able to let someone else hold my baby? Me? Not so adaptable.

There were other things to consider, like would he sleep in the car? He used to be a champion car napper, but he’s older now. His patience is shorter and his need to move greater. We didn’t know how to be out in the world with our child because he is not the same baby as three months ago. We were intimidated and daunted by the prospect of a long car ride with a 9-month-old.

Ultimately he was fine. And no, he did not really sleep much in the car. And yes, there were a lot of desperate off-key rounds of “Wheels on the Bus.” Much to our surprise, he was perfectly delightful with the “strangers,” otherwise known as his family.

As for me? It was a relief to not have to watch him, entertain him, hold him, or clean up after him during all of his waking hours. And, I was surprised at how much fun I had watching him explore his grandparents’ home, play in their backyard, and spend time with his aunt and uncle.

When the pandemic first began, stay at home orders were open-ended. How long would this last? A few weeks in, we watched our baby attempt crawling for the first time. How many major milestones would we witness while in quarantine, I wondered? Of course, anyone with children became worried that this extensive withdrawal from other people would impact our kids’ emotional and social development. I was no different. Having gone from weekly Mommy and Me classes to not even being able to even interact with our neighbor’s babies, let alone anyone in our immediate family, I began to fear for my son’s human interaction deprivation.

Countless NYT Parenting articles assuaged me of my concerns. The experts all agreed that the kids would be alright. Babies in their first year especially, hardly needed anything outside beyond the walls of their homes in order to grow well. Lots of love. Lots of attention. Much could be learned just from the immediate family unit.

But last weekend I realized, even if my son will be just fine, maybe I’m not. Watching him experience a new environment (OK, he’d seen it before, but only as a lumpy newborn), and actually engage with other people brought on the most AMAZING feeling. I think most people would describe it as joy, though it’s been so long since I’ve felt such a thing, it’s hard to know for sure.

Parenting during a pandemic imposes the hard shit without many of the little moments of joy as a reward. I have to wake up so early every day. I have clean so many bottles. Wipe down so many high chair trays. Pick so much food up off the floor. Endure so much spit up on my clothes. Listen to so much frustrated moaning and crying from a person who can’t use his words to express himself yet.

And, after enduring Groundhog Day every day for a quarter of a year, I don’t even get the simplest pleasure of having a stranger at Whole Foods get way too close to me just to gush how cute my baby is. I don’t get to take him to the Mommy and Me swim class at the aquatic center this summer. I don’t get to watch him share toys on a mat with his future best friends at a girlfriend’s house. I don’t get to show him the animals at the zoo. I don’t get to profusely apologize to our server because he’s truly destroyed the table where we had dinner at our favorite restaurant.

It breaks my heart.

Yes, we have our health. Yes, we are lucky in so many ways. Yes, one day I will get to, hopefully, do all these things. But, I won’t get to do them NOW. I won’t get these months back, his FIRST months. He’ll only be 6 months, and 7 months, and 8 months, and 9 months and beyond just once.

As I join another requisite birthday Zoom, I joke to friends that celebrating a birthday in quarantine is a 2020 rite of passage. It will come for all of us, including my son, for his very first birthday. I get bummed thinking about it, especially since it falls on the Sunday of Labor Day weekend – literally most perfect day to have a party.

I’ve learned to expect less and find moments of happiness on a smaller scale. I look forward to walks. I take pride in caring for my tiny home. I make phone calls to friends like did in high school. I consider baking but eat too much candy instead because I’m too tired of cleaning the kitchen. I spent so many years perfecting my ability to be an individual, and now I am being called to put that aside and work on being a unit of three.

As much as I feel deprived of watching my baby experience the outside world, I feel an abundance within the walls of my home. And, as the experts said, it’s all we need to be happy, healthy, and to grow properly.